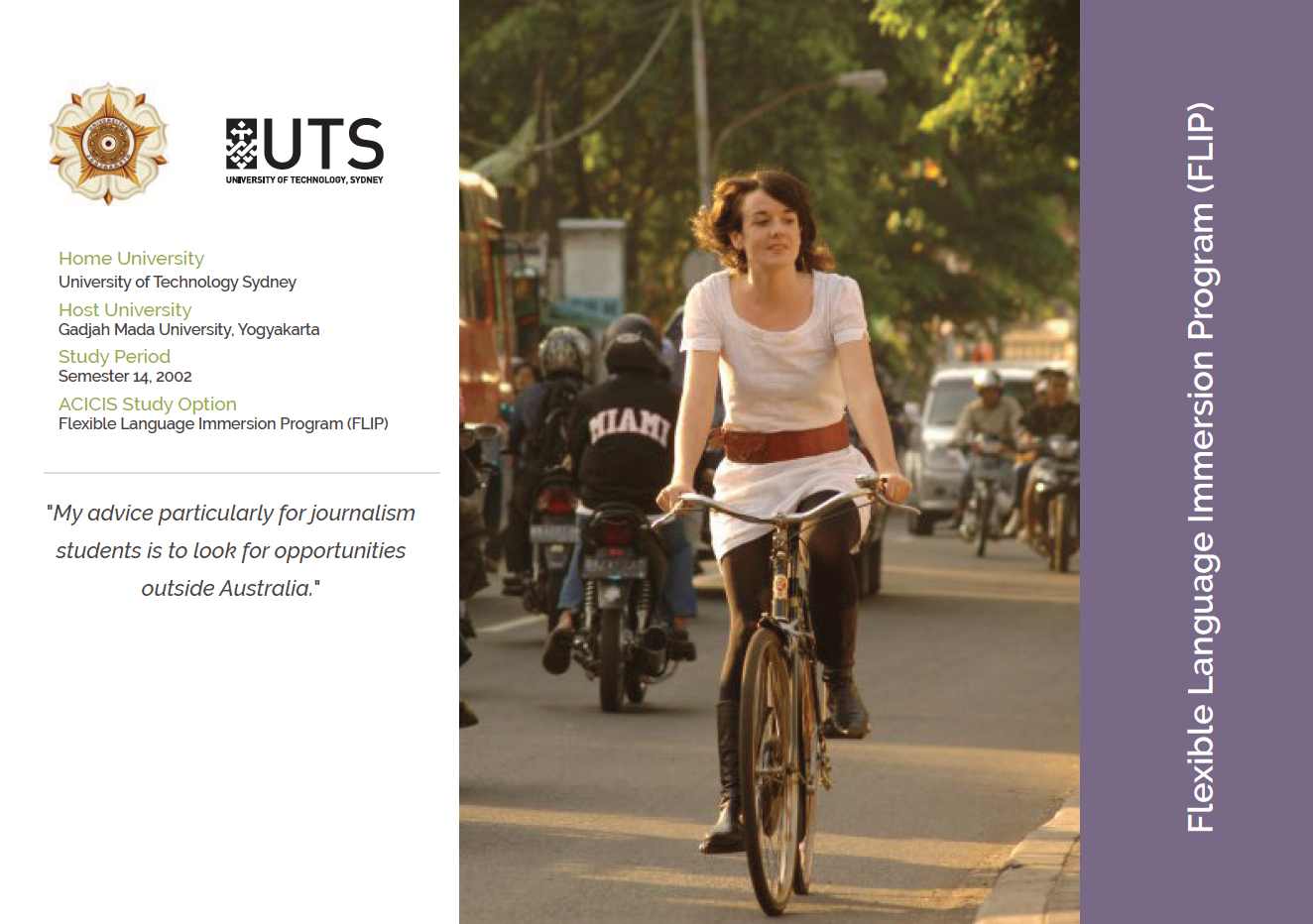 This article originally appeared on the ACICIS Annual report 2017. Information is correct as of May 2018.

I did the ACICIS in-country year- long program in Yogyakarta as part of my combined Communi-cations and International Stud-ies degree at the University of Technology Sydney (UTS). I had studied basic Indonesian at high school and travelled there with my family a few times. On those visits I became very interested in the per-forming arts scene and I did my drama HSC final work on Putu Wi-jaya, the Balinese playwright. So when it came to having to select a country for my in-country year abroad I put down on the form that I wanted to go to Indonesia or Italy and someone at UTS decided for me!

My year studying in Yogyakarta was brilliant; an absolute high-light of my university degree and it’s no exaggeration to say that it was life-changing, as I write this from Indonesia. I did six months at Gadjah Mada University mainly learning the language and the rest of the year at ISI (the Indonesian Institute of the Arts, Yogyakarta) studying dance and drama which was quite an experience. Through the ACICIS program I got in touch with people setting up a com-munity radio station for street children and got heavily involved with that project through hosting a weekly radio program. Another highlight was doing a project documenting the local hip hop scene which introduced me to many lifelong friends.

I got my first job at SBS Australia in the final year of my degree largely based - I think - on the work experience and language skills that I had gained from my year in Indonesia with ACICIS. A few years later it was also the reason I got a job with the Indonesian national radio network KBR, as the editor of a regional current affairs program called Asia Calling based at the Utan Kayu community in Jakarta.  This started a fascinat-ing and rewarding media career in South East Asia.  For ten years I reported and worked closely with journalists at the frontline of press freedom across the region.  Now I work for the BBC as the Indone-sian editor and correspondent, a job that takes me all over this di-verse and fascinating archipelago.

My advice - particularly for jour-nalism students - is to look for opportunities outside Australia, as the media market in Australia is very small.  ACICIS does a great professional placement course in Jakarta for media students that is brilliant but my advice would be to take a year if you can, slow down and really enjoy your time as student in Indonesia.  So much of what makes people a good journalist is their life experiences, so it’s good to do things other than media work while you can.