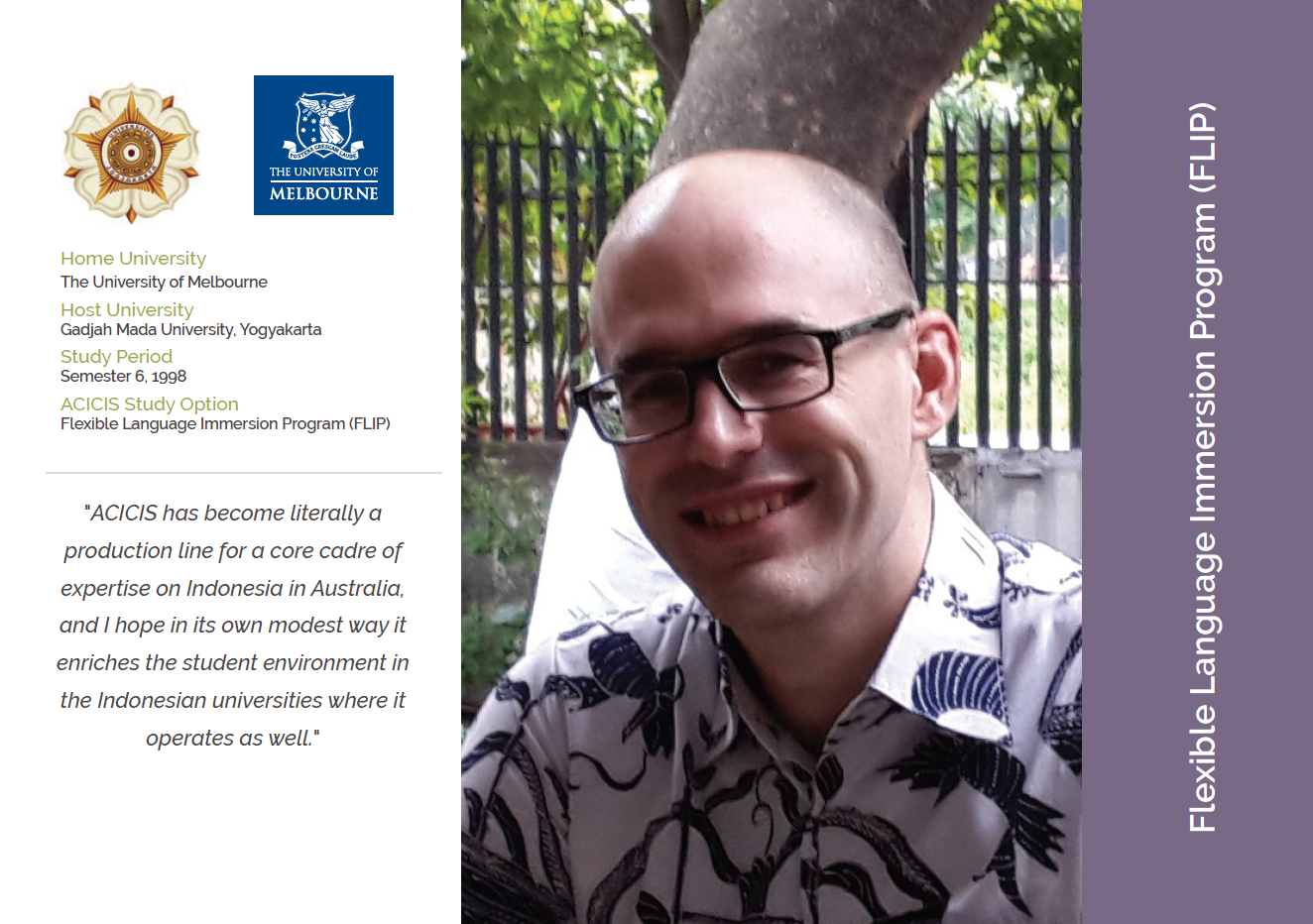 This article originally appeared on the ACICIS Annual report 2017. Information is correct as of May 2018.

Reflect on your time studying in Indonesia
I could best describe my ACICIS year in 1998 as a once-in-a-lifetime experience, witnessing Suharto's authoritarian regime topple and seeing firsthand the first moments of Indonesia's transition to democracy. I spent one semester studying political science at UGM, and a second travelling around the country interviewing student activists for my first in-depth piece of research as part of ACICIS' field study pro-gram. In between semesters, I volunteered in Jakarta at the Alliance of Independent Journalists (AJI), a group I'd heard of while studying Indonesian through their dispatches on SBS's Bahasa Indonesia radio program. Looking back, the year defined my subse-quent career path as a researcher in think tanks, the World Bank, and now an academic, as I gained my first glimpse into the world of political activism in ac-tion and realised how much I enjoyed observing and interpreting history as it happened. It was a lot of fun too.

How has the ACICIS program influenced your future career path?
First, I think Gadjah Mada University is a big part of it. Going to university there, you're studying with Indonesia's best and brightest. It makes for a very stimulating student environment - an environment to form great friendships. I'm still in regular touch with friends I made back in 1998.

Second, looking back, the year brought me into con-tact with any number of people who gently nudged me in the right direction. The field study semester I spent researching the student movement was a real highlight - I spent months travelling around sleeping on the floors of NGO offices and student dormitories, while listening to and sometimes participating in po-litical discussions into the early hours of the morning. The experience led to my first academic publication and gave me the confidence I could do a PhD involv-ing fieldwork in difficult circumstances. Ironically, I wouldn't have even thought to do it but for the ACICIS resident director at the time suggesting I'd get more out of field study than another semester of lectures at UGM.

The same is true of volunteering at AJI. Again, it was a PhD student I met on campus who suggested I go to Jakarta and volunteer rather than just go travelling between semesters. It was one of the people I met through that volunteer stint who suggested my PhD topic to me, which in turn set me on the path to work-ing for the International Crisis Group and the World Bank.

Third, I think the long immersion was a key to my positive experience. Don't get me wrong, I think the shorter options that are now available are great, and introduce a much broader range of people to Indo-nesia but as someone who had been to Indonesia even before my ACICIS year there was no substitute to spending a whole year there. I gained a much bet-ter understanding of Indonesian society, became so much more fluent in speaking the language, and had time to make what I hope will be lifelong friends.

What advice do you have for a student interested in studying with ACICIS?
So in sum I'd recommend the ACICIS experience to anyone, and encourage people to go the extra mile during your time on ACICIS to seek out opportunities to volunteer or gain extra experiences. ACICIS has become literally a production line for a core cadre of expertise on Indonesia in Australia, and I hope in its own modest way it enriches the student environment in the Indonesian universities where it operates as well. I hope ACICIS will continue to play this role over the next decade.